Some of the Women Behind Free Clinics

We are thankful for the many pioneering women who have helped ensure all Virginians can access the care they deserve. 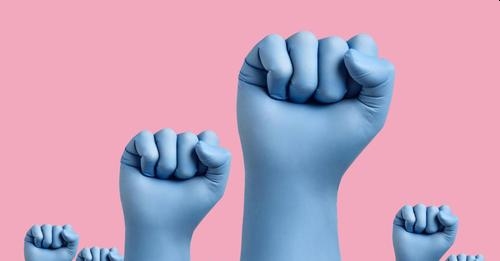 In the early 1990s, Sister Josepha Haskins drove across state lines to pick up samples of medication for her patients. As the story goes, she stuffed the medicine in trash bags, piling them high in her pickup truck to maximize space. She then headed back to the Tri County Health Clinic, the clinic she founded in Richlands, not far from the West Virginia border. But the return trip was not without drama. Down the road was a police checkpoint, giving pause to the nun, who also served as the clinic's pharmacy tech. Worried that the officers would find the bags of medicine suspicious (even though the transport was legal thanks to an interstate agreement), Sister Josepha turned to find another route, an abrupt move that alerted the officers. They pulled her, and the truck full of prescription drugs, over. Thankfully, a quick explanation from the nun – and possibly the help of a silent prayer – earned the officers' trust, and she was allowed to proceed.

Decades later, the anecdote is firmly entrenched in clinic lore. Sister Josepha passed away in 2016 after a lifetime of serving the community, but her drive and commitment to caring for others endures at the Tri County Health Clinic, just as it does across Virginia's 60 free and charitable clinics today. Over the years, countless people helped to create the state's strong network of free clinics, clinics that are deeply rooted in their communities and that help local residents live healthier lives. By and large, they are modern facilities, staffed with compassionate medical professionals and volunteers whose skill and care help people navigate a range of medical conditions, from regular wellness checkups to chronic illnesses like diabetes, heart disease and hypertension.

The nation recently recognized Women's History Month, and the team at the Virginia Association of Free and Charitable Clinics used the time to reflect on some of the incredible women, like Sister Josepha, that have helped shape the state's healthcare safety net. Free clinics are so firmly rooted in our communities that it can seem as if they have always been a part of our history, however, most free clinics did not take shape until a few decades ago. Virginia's first free clinic, the Fan Free Clinic in Richmond, now called the Health Brigade and led by Karen Legato, opened its doors in 1970 thanks in no small part to the organizational prowess of Mary File Clem, who was a driving force behind the clinic's creation.

Shortly afterwards, a young carpenter from Roanoke named Henry Bell volunteered at the Richmond clinic and was inspired to open a similar organization in Roanoke. After partnering with his surgeon-father and forming a board of directors, Estelle Nichols Avner accepted the opportunity to serve as the Bradley Free Clinic's volunteer director, eventually becoming its full-time director and a powerful force who inspired other free clinics across Virginia and the country. She co-penned, A Free Clinic: Starting Out, a book that detailed current best practices for starting and operating a clinic. More than 3,000 copies were printed, providing a roadmap that helped open facilities in Chicago, Spartanburg, South Carolina and Kennubunkport, Maine, among other communities. She retired in 2014, after leading the Bradley Free Clinic for 40 years.

In 1990, many clinics struggled to recruit physicians due to concerns that the Good Samaritan Laws didn't cover volunteer medical professionals. Attorney General Mary Sue Terry stepped up and helped extend state liability coverage to free clinic physicians through legislation in the General Assembly. Our modern network of clinics is indebted to another influential woman, who helped direct important corporate dollars into clinic startup costs. Wilda Ferguson led community relations at Blue Cross, Blue Shield (now Anthem) in the 1990s, assisted by Charlotte “Charlie” Carnes, creating a grant program that funded clinic startup costs and annual operating budgets. That corporate philanthropy helped birth clinics throughout the commonwealth via grants that continue to have a lasting impact.

A roster of incredible women were also responsible for a legacy of healthcare “firsts” in Virginia. Among them, Annette Suarez, a former clinic director at Fan Free Clinic, served as the first executive director of the Virginia Association of Free and Charitable Clinics. The organization itself was a first – the first statewide organization of free clinics and served as a model for other states as well as the national association.  After years of advocacy as the leader of the Virginia Healthcare Foundation which provides funding to support clinics, Deborah Oswalt was a driving force in Virginia's Medicaid expansion in 2019, which connected thousands of Virginians to healthcare coverage for the first time in their lives. More than 1.4 million people are enrolled in Medicaid and CHIP today.

Another pioneer was Zakia McKensey. While working at Health Brigade, she helped create the state's first transgender clinic, giving transgender people access to hormone replacement therapy and other resources in a safe and affirming environment. The clinic continues to be an important resource for the Richmond region's transgender and nonbinary community. The truth remains that many incredible people helped build the strong network of free and charitable clinics that operate across Virginia today and the work of clinics has never been more important.

The state's efforts in expanding healthcare coverage have been life change for many. Even so, more than 200,000 Virginians do not have health insurance. In a practical sense, clinics are helping uninsured and underinsured people access preventive and lifesaving care while reducing costly emergency room visits. Most importantly, clinics are helping people live longer and healthier lives. It's an impact we're all proud of. When it comes to serving the needs of vulnerable people, Virginia's free and charitable clinics are unstoppable. We continue to be thankful for the many leaders who help ensure all Virginians can access the care they deserve.

Working towards a Virginia where all people have access to comprehensive, quality healthcare by supporting and advocating for our member clinics so that hardworking individuals and families are protected from healthcare crises.